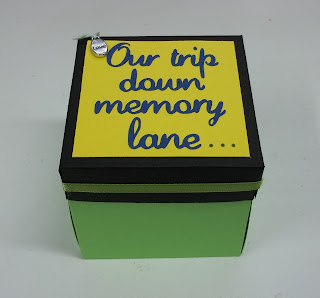 Happy Thursday gang!  I wanted to show you a few picks of my first-ever explosion box. I'm not sure why I was ever so intimidated by them...it was fun! My daughter wanted to make a special card for her boyfriend to commemorate the first anniversary of the day they met.  The idea was her brainchild and she assembled most of the Cricut cuts.  I just made the box and handled the logistics!  I really liked the way it turned out, and now it has my creative juices flowing for future boxes with different shapes and pop-up goodies. 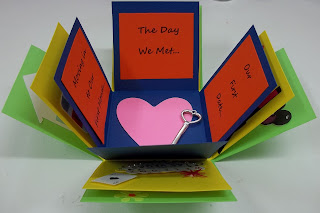 This is what the box looks like when it's "exploded."  Emily used the theme, "A trip down memory lane" and each section represented a milestone in their first year together; the day they met, their first date, their first trip together, and their first home. 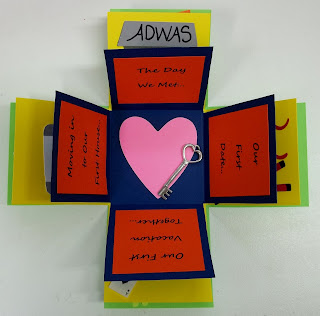 When the box is fully opened, you can get peeks and hints about what's behind each category.  She used the heart in the center to write her personal message to him.

The word, ADWAS, shown in the picture above (just in case you're wondering) is the name of the agency Emily works for (and it's where her and her boyfriend met.) It's the acronym for the Abused Deaf Women's Advocacy Services.  Here's a post I wrote about her and the agency last year.

Email ThisBlogThis!Share to TwitterShare to FacebookShare to Pinterest
Labels: cricut, my work

Super Cute Box!!I have to try to make one!!TFS
Migdalia

Very sweet!! I am sure he will love it!! Very creative idea!!
Kristan

Love the box...this is too cute! Thanks for stopping by my blog...I'm your newest follower! Happy Crafting!

That looks like a time consuming project, but it's amazing!

This turned out really great! I love all the colors!