Have you entered my birthday giveaway yet?  If not, please click HERE!  You only have a few more days! 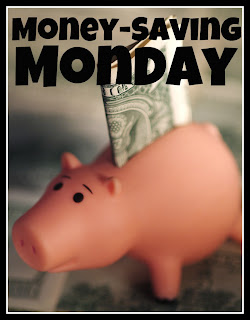 It's back!  After a couple of weeks of rest, Money-Saving Monday is back this week!  Sorry for the hiatus, but sometimes the brain works creatively and thinks of cool things, and sometimes it doesn't!  My brain has been on vacation the past few weeks!

Last month, I bought some unmounted stamps and used Crafter's Companion EZ Mount foam to mount the stamps so that they would cling to acrylic blocks.  It worked great, but after I trimmed the excess rubber and  mounting foam off, my scissors were so gunked up, they were unusable   I considered tossing them at first, but they were relatively new and still super sharp, so instead, it was hubby to the rescue! 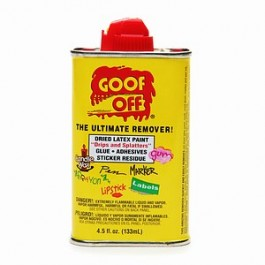 He went out to the garage and came back with some Goof Off.  Even though this stuff is billed as paint remover, hubby has used it for years as a "sticky" remover too.  I put a few drops of this stuff on a paper towel, wiped both sides of my scissor blades with it, and presto...scissors just as good as new!  This is also the same stuff I used to take the sticky off of the baby food jars I use to display my embellishments,  You can find Goof Off at most stores including Wal Mart, in the hardware or automotive section.

If you can't find Good Off, another good solution is using lighter fluid.  It may take more than a few swipes, but usually fixes the worst sticky messes too!

O I need to get this stuff!! My scissors are so sticky from cutting foam tape!! O and we are doing snow globes out of baby food jars and could use it to get the labels off!! Smart hubby and you!! I need more info on the unmounted stamps?? I bought two sets of popcorn bear from crafters companion (still waiting for them in the mail) and don't want to but the mounting stuff could I use Aleens's tack it over and over again?? The lady who does the crop unmounted her wooden block stamps and that is what she used would it work the same? thanks
Kristan

Do you know how many scissors I had to throw away and buy..:( and I am so happy to read this post.Love the money saver tip..I still use the tip for my Cricut mat,Thank You..
Have a wonderful day,
Midgalia

Great tip. FYI..a hot knife and glass cutting board is so much easier for cutting the sticky foam mount. It cuts through it like butter and doesn't get your scissors all sticky. :)

Yeah! Now I know what to do about my baby food jars! So excitedplus just saw your craft room featured so my lids are getting painted on jars too.
You Rock Amy!