First off, I owe each and every one of you an apology. I took an unexpected week (plus) off of blogging and my wonderful blog world with no notice or word.  For those of you who wrote and asked (thank you!) I'm still alive and kicking!  I had a few health issues, and I was procrastinating because is was my birthday and I was celebrating as much as possible!! Thank you for checking in, and thank you for coming back to read again.  And for those of you who are new here and on Facebook, Twitter, and/or Pinterest, WELCOME!!  I am humbled that so many of you chose to come hang out with me for a few minutes out of your day!  I PROMISE to either visit or respond to each email or comment I've received.  I'll be playing "catch-up" this week!

Now, on to the topic at hand.  Over the past few years, the month of October has become synonymous with  Breast Cancer Awareness, and the recognition and outpouring of support for such a horrid disease has brought some really great advances, both in treatment and in screening.  Awareness is something that's been needed for such a long time, and I'm so glad it's finally out there and being talked about openly.

But did you know that October is also National Domestic Violence Awareness Month?  Stop reading for just just a minute and count to NINE.  It's okay, I'll wait.   Did you do it?  Every NINE SECONDS a woman in this country is a victim of domestic violence.  In the time it took you to count to nine, an abuse took place.  Scary huh?

If you or someone you know has questions about domestic violence, or needs emergency assistance, you can contact the National Domestic Violence Hotline 24 hours a day at 1-800-799-SAFE (7233).

This time last year, I wrote about my beautiful daughter and how incredibly proud I am of her chosen career path.  You can read that post HERE.  She works at an agency called the Abused Deaf Women's Advocacy Services (ADWAS) and on top of her usual duties, this year she was on a committee of three people to plan and execute their annual charity dinner and fundraising auction!  She and her two co-workers did a SPECTACULAR job!  And since the dinner was the same week as mine and hubby's birthdays, she bought us tickets to go with her as our birthday presents!!!  I can't even begin to tell you how proud I was of her!  I thought I would show you a few pics of the gala, including the cake toppers she and I made for the "dessert dash." 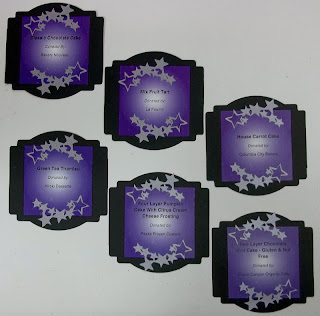 These are the cake toppers we made last week for the desserts.  Each one has a descriptive name of the dessert, and who it was donated by.  I used Cricut cuts from the Wild Card and Elegant Edges cartridges.  We made 30 of them and realized we'll probably need more next year! 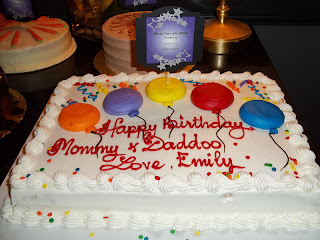 This was one of the desserts on the table when we got there!  Emily had bought us a birthday cake!!!!   We just had to keep out fingers crossed that nobody chose it before we had a chance!  Luckily, they didn't! 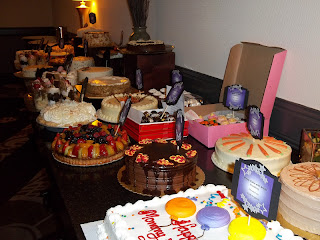 Here's a wider shot of the goodies.  After dinner is served, each table pools their money to go towards "buying" a dessert in the Dessert Dash.  The table that raises the most money gets first pick of their cake or dessert.  The second highest table gets second choice, etc. 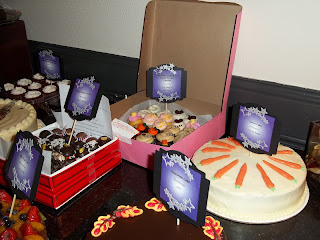 Here's a better shot of our cake toppers! 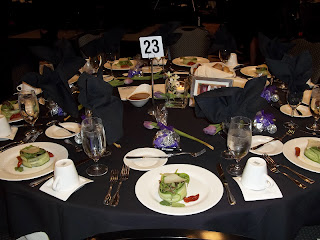 This was how our table was laid out when we got there.  Emily and one of her co-workers were our table hosts, so they decorated our table.  We had purple (the DV awareness "color") tulips and beautiful bags of candy as favors. 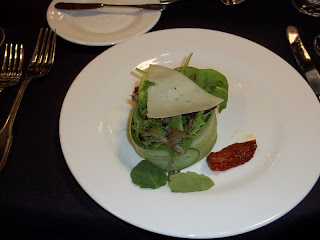 A close up shot of our salad...it was a gorgeous work of art! 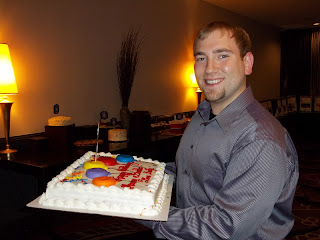 Here's Bryan (our daughter's cute boyfriend)  when we finally got our cake.  He was very happy that no one else chose it before we had a chance to get to it.  I will say though, that several tables started to chose it, until they read what was written on it!! 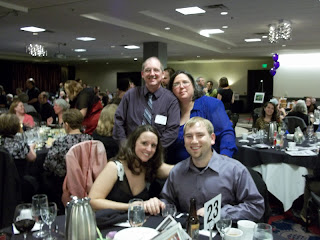 Here's the four of us right before we cut our birthday cake.  The pic with us AND the cake on the table in front of us came out blurry, so you just get to see just the family pic!!! 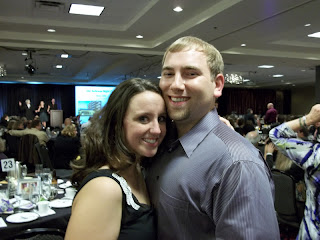 Emily and Bryan after the festivities! 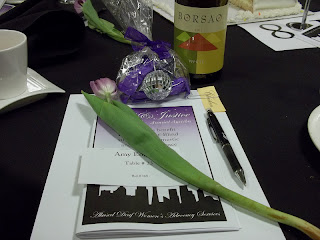 Our bidder number, name tags, program, and favors at the end of the evening...(and that might just be an almost empty bottle of wine too!  Hey...it was my birthday!)  Notice the miniature disco ball on the bag of candy?!?  That would be my daughter's doing!  THAT'S my girl! 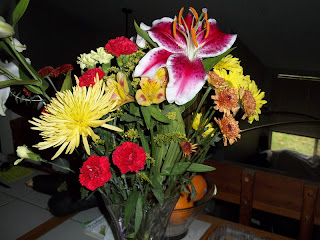 And here's a pic of the beautiful flowers (from hubby and daughter) that I woke up to the next morning on my actual birthday!

Although we had a spectacular time and the auction raised a bunch of money for the agency Emily works at, I want to make sure to end this post with the focus exactly where it should be.  If you have questions about domestic violence, even if it's regarding a friend or a loved one, there are resources available to you.  The National Domestic Violence Hotline can answer questions and point you in the right direction.  If you're the one being abused, they can get you HELP.  So I'll repeat....

If you or someone you know has questions about domestic violence, or needs emergency assistance, you can contact the National Domestic Violence Hotline 24 hours a day at 1-800-799-SAFE (7233).

Email ThisBlogThis!Share to TwitterShare to FacebookShare to Pinterest
Labels: General stuff, my work

Amy, you're amazing!!! Emily is the awesomest!!! You all look lovely for your night out on the town!!!

Thanks for sharing the info on Domestic Violence, I pray that someone that really need this information sees it and acts on it.

Great cake toppers. Happy belated birthday. Hey, after all that work on the cake toppers, you deserved that bottle of wine.

Looks like I should have looked at this post first before making a comment on the WOYWW post!! the toppers turned out very pretty and how sweet of her to have a cake for you and your hubby!! I know I said something like this when you first wrote about your daughter and her job (which is how we became blogger buddies) but I really think what your daughter and the orginization does is amazing and you have every right to be proud of her she is making a huge difference in women's lives that otherwise would be forgotten!
Kristan

What a great project for a good cause! Such a beautiful table too! 10 stars for your daughter!!! Patsy from
HeARTworks

Awesome post! My first marriage was a living hell, mentally and physically, and I survived but only with the help of awesome folks like you and your daughter! Like you I can only stress that the victim of DV needs to get help asap cause it doesn't get any better left alone.
vickie

Happy belated! That's an awesome cause to be a part of. You and DD did an awesome job with those cake toppers love the disco ball and color choice!