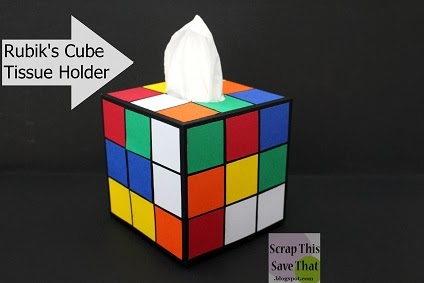 I'm so excited to share my most current project!  Inspired by the television show The Big Bang Theory, I made a tissue box cover that looks just like a Rubik's Cube.  I first saw the idea of making one of my own on the blog Dream a Little Bigger.  Although I didn't make mine anything at all like hers, I wanted to give her props for the inspiration as well. 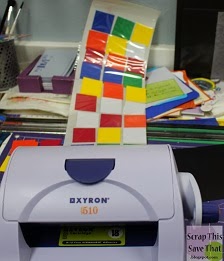 My tissue holder is completely made of card stock.  I made a black box with no bottom, cut out an oval with my Silhouette Cameo, and then cut out 1 1/2 inch squares from the six different colors that you would find on a Rubik's Cube.  I used my Xyron machine to adhere adhesive on the back of each square.  I was going to use my  ATG Gun, but I didn't want any of the little corners of the squares to bend or not be completely adhered.  Although I used a lot of adhesive, the Xyron was a better choice. 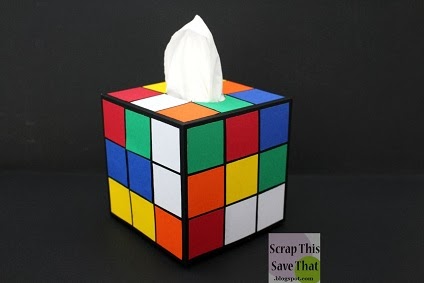 I love my new tissue box cover and already have family members asking me to make one for each of them as well.  Husband wants me to make one that looks like the cube has already been solved.  He says even though he knows mine is just made out of card stock, he really wants to try to solve the puzzle!

Email ThisBlogThis!Share to TwitterShare to FacebookShare to Pinterest
Labels: my work

That’s really cool! A game-themed tissue box collection would look nice, though I feel like card and dice designs have been done before. Yet they can be fun to look at when you display them together. It can also be a perfect gift for those who are young at heart!

I think that would be awesome Jill! I hadn't thought about doing dice! I actually got the idea for the Rubik's cube cover from the TV show, The Big Bang Theory!