Today is my last day as the Growing In Unity girl.  I've had a blast this week playing with lots of stamps and trying some new things... did you see the pocket pages? 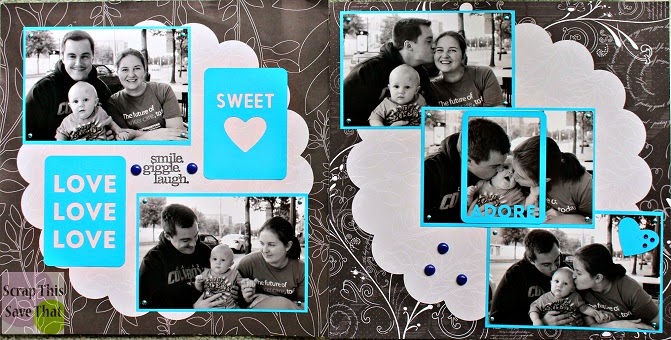 I decided to do a scrapbook layout for today.  These are some photos I took of my son, daughter-in-law, and cutest-ever-grandson last fall.  Oh, I just melt every time I look at that adorable little face! 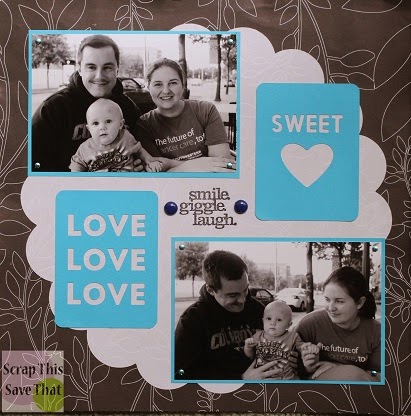 I've been playing with using papers in black, white, and grey, along with B&W photos and just one color.  I LOVE the effect it creates.  I've done some in the past too, and I just find it's a very striking contrast that really sets the mood and tells a story.  You can see this same effect with burgundy HERE and purple HERE if you're interested!

I used some Quick Quotes cardstock I've had in my stash for a while along with some solid blue cardstock which I cut into 3x4 cards with my Silhouette Cameo.  I used part of an Itty Bitty stamp set by Unity called Smile. Giggle. Laugh for the sentiment in the center of the page above.  I just felt it completely described the whole layout!  I also added a bit of bling and some enamel dots. 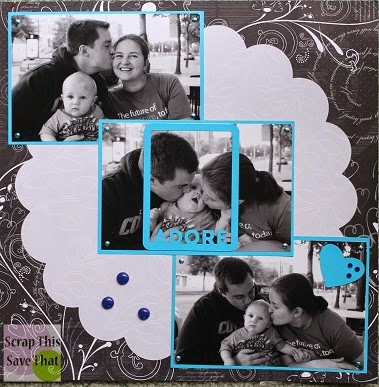 I've had such a great time this week seeing some old friends and making some new ones.  If your comment had a return email address or a blog attached, I promise to stop by or reply to say hi soon!  And speaking of comments, don't forget to leave one to be eligible for the drawing for TWO Itty Bitty stamps sets courtesy of Unity. I'll be drawing on Monday so dont forget to stop back by!

Oh these pics are beautiful in this format and eye catching colors. Very nice pages!!!

Great layout of these cute photos and I like the pop of blue.

Precious layouts, Amy! Thanks for sharing with us this week.

How sweet---I like the background, and how you used many photos!!!!

Love that pop of blue!

Adorable grandson and fabulous LOs. LOVE the effect with the B/W + one color!!!
<3 J

Totally Awesome! Love the monochrome with the pop of blue. I need to try that....thanks for your inspiration all week. I've enjoyed it.

Beautiful layouts. I love the black and white photos, somehow it lets the faces shine through and your layouts highlight the people and don't distract from them. The giggle sentiment was perfect! Sorry your week is over Amy, it's been fun to follow along this week. Enjoy the sunshine this weekend.

Such a precious keepsake.

Lovely layout! That background is so pretty!